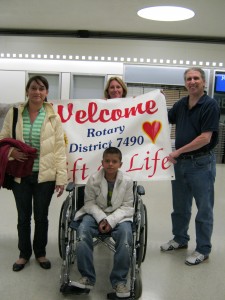 Debby Flower knew after attending her 1st Gift of Life (GOL) dinner that she would volunteer for this wonderful program. In October of the same year she received a phone call that changed not only her life but that of her entire family: Erik, her 12 year old guest, and his mom were due to arrive from their home on the outskirts of the capital of Honduras, three weeks later.

As Debby relates, Everyday became a new and wonderful experience. We participated in Erik’s love for wrestling with a “Wrestling Pizza Party” attended by many club members, and cheered on his favorites. On Halloween (a holiday not celebrated in Honduras) club members introduced him to “Trick or Treating” which netted a pumpkin full of candy. They also brought dinner and spider cupcakes. Erik and Jenny had their first venture to the beach, although “mucho frio,” it was very enjoyable for all of us. Only a few weeks after Erik and his mom entered our lives, I couldn’t remember what life was like without them. If you were able to spend some time with this wonderful boy, you would know first hand what I am talking about.

Erik was admitted to Montefiore Hospital in New York on Nov. 12th for heart surgery. He had four holes in his heart, a blocked major artery in the heart and a “thickening” of one chamber of the heart. These conditions were from birth and had just become worse as he has grown and attempted sports. They were more serious than the surgeons at Montefiore expected.  Two days after his surgery, we were all relieved when a sleepy Erik managed to give “thumbs up”.  He also said “Buenos Noche” and flashed his infectious smile.  He recuperated nicely and was active again in no time.

Back at home, even trips to Walmart and the zoo were a special treat, when seen through his eyes. He was so happy to be able to buy presents for his 3 siblings at home.  We received an added pleasure by having Erik and Jenny with our family for Thanksgiving.  During a surprise trip to Medieval Times, Erik never let his eyes leave the arena. He loved his crown.  Although shy at first, at the end of the night he agreed to have his picture taken with the Knight.  Our last outing was a trip to the Big Apple circus.  After the show we were treated to a private back stage tour where Erik got his photo taken with some of the performers. We took a whirlwind tour of New York City: St. Patrick’s Cathedral, Rockefeller Center with the unlit tree and the ice skaters, Times Square, Columbus Circle, Hard Rock Cafe and David & Busters, which was his special request. Erik loved all the lights and tall buildings.

he first few weeks after they left to return home was a difficult transition. There is not a day that I do not think of them and I am grateful that we have remained in touch to this day. When people thank me for hosting this family I can’t help but feel that Erik and his mom, Jenny, really deserve the “Thank You” for bringing love, joy and happiness to myself and my family.